Posted on 13 January 2019 by DeoMercurio 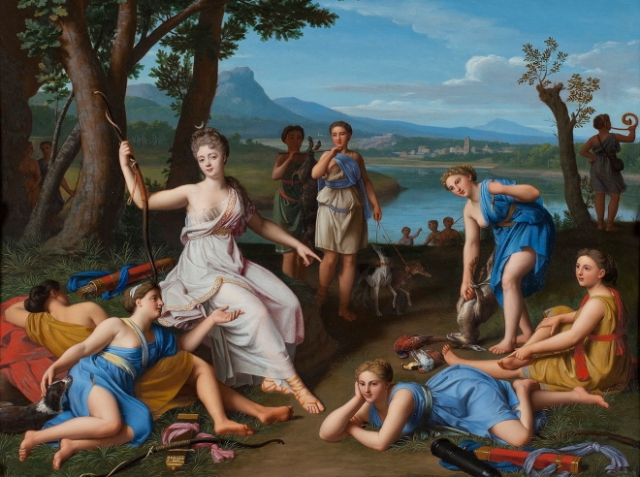 Diana Returning from the Hunt by Nicolas Colombel (1697).

O holy Diana of woods and groves,
Diana of hidden paths and safe houses,
Diana of the moon and stars,
Diana of the Drinking Gourd and the mossy bark,
Diana, friend of all who seek freedom,
nurturer of all that is wild and beautiful,
of all that is untrammeled and brilliant,
Diana, delighting in sisterhood,
Diana, spurning any husband
yet bestowing fertility and keeping watch
over mothers in childbirth,
Diana, passionate defender of the right,
unerring avenger of injustice,
Diana magnificent and far-sighted,
Diana inexhaustible in magic,
Diana waxing and waning, forever undiminished,
Diana of the silvery light flashing
from the speeding arrowhead,
long your flowing tresses,
short your hunting-skirt,
Diana of the hounds,
Diana of the hinds,
hail and thanks to you, most holy goddess!
Let us participate in your spirit:
let us receive your glorious lesson.
Diana queer, Diana free of labels,
Diana potent, Diana gentle,
Diana healer, Diana huntress:
favor this Republic with a new dispensation,
free of bigotry, equal for all,
committed together to social justice
and a future egalitarian and green.

I’m a Gaulish polytheist, now back living in lands ceded by the Council of Three Fires after several years’ sojourn in Anatolia and in the land of the Senecas, with frequent travels to Gaul along the way. My grandfather’s family came from the area around Trier, and I identify closely with the Treveri in my religious practice.
View all posts by DeoMercurio →
This entry was posted in Uncategorized and tagged Blue Wave, Diana. Bookmark the permalink.